My buddy called me last week, really excited.   He saw a commercial about World of Warships.

I’m thinking, this must still be open beta.    A lazy websearch also ‘confirms’ this.

“Yeah dude – they aren’t live yet.    The gold isn’t linked between the games, so it’s not live”

This was early last week, and today, as I updated the game, I googled the correct thing and found out the game is released as of September 2015.    Gold has not transferred according to the unified account vision which was described early on in development, but otherwise this is apparently the real deal – it’s all live, you can buy replacement gold currency described as doubloons, and the game and progression will not be reset.

How did I miss this ?    No email – that I could remember.    No announcement.   No other bloggers playing ?    Or am I that far behind reading compatriots blogs ?   No matter, I know about it now.

I haven’t played for months – You know, Ingress took over my life – so I logged in after updating and found myself immediately in some kind of tutorial mission.   While I’ve probably forgotten plenty, I did seem to know enough to survive the tutorial without embarassment.

The “Garage” is replaced, naturally, with a Port for this game, and I get four starter ships.

Only four ? Aren’t there British ships ?

Random clicking did not produce the tech tree, but I did find my service record. 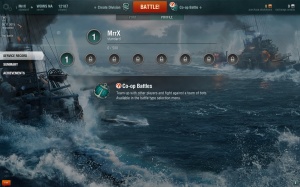 There are now 11 “Service Levels” which presumably unlock tiers of the tech tree.

And so I went into my first battle, which as memory serves, is players on my side and bots on the enemy side.

You start out looking for enemy ships among the islands.

I maneuvered a bit and ended up sunk in my first battle. 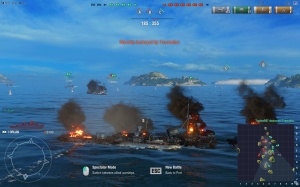 But the third battle put me into “Service Level 2” where I had access to the tech tree. 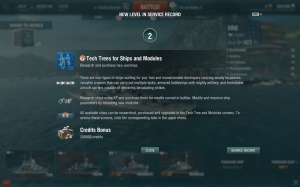 That’s why I couldn’t find it before.

It looks like I have something new to amuse me.

World of Battleships, World of Tanks

It’s interesting how the meta for World of Tanks keeps changing.

Just after release, the big idea for most players was moving up a selected tree, and getting their Tier X tank.   Whatever it was.     These players then moved on to adding additional Tier X’s to their garage, usually for clan wars reasons and a desire to get “the best tank”.    Adding clan wars and E-sports rounds out the “lofty” goals for the metagame.

I did things a bit different.     Without a specific goal in mind, I think I can back into it better at this point by saying I wanted to unlock the entire German tree – this is the rare “Technical Engineer” achievement.

This goal still has a LOOONNGGG way to go. Not expecting to achieve this in 2015.

I next found myself moving up many different trees, and keeping most of the tanks earned along the way.    This shifted me to being a “Tank Collector”.    And after getting (a very large number) of tanks and tank slots, I find the collector allure fading.   When you own a tank and can’t ever play it, why did you find it necessary to get it again ?

Tier X play isn’t that much fun for me.    Why am I running the matches exactly ?    I don’t play clan wars.     There’s nothing to unlock.   You don’t make silver credits, you lose them.     The handful of Maus and JPE100 matches I’ve had have been enough.   And if I want to see my crew improve, that’s what premium tanks are for – which both improve the crew, and make money.

I guess the question of “Is the Tier X fun ?” is not as relevant as you’d think, given the other game choices.

Today, I find myself thinking the following about the game :

I have spent the last week progressing the missions, and now need Light Tank # 10.   I’m finding getting 1,000 assist damage difficult, to say nothing of not being spotted, which is the mission requirement.    700-800 happens a lot, so I’m sure I’ll hit it at some point.

With two TD’s on the “Bottom” of my personal match history, I started trying to complete TD #1 as well, and I’ve finished it, but not yet with honors.

So it looks like the game will now be a slow progression along many, many different fronts.     This also means it’s more difficult to blog; I have to look for game outliers where I do something “Awesome”.    But the game still continues.

And my other Tier X ?    The Maus is still sitting in the garage, crewless.     I’ve waited for around six weeks for a retraining special, and I don’t think it’s going to happen, so it’s time to just bite the bullet and spend the gold.  The Veterans Day weekend special is pretty good, but doesn’t include retraining discount.

World of Warplanes is getting closer to launch.    It turns out, that you get a minor benefit if you’d been playing those beta games – your XP will be converted at launch into crew XP, and distributed among your starter airplanes.     And of course, there’s a good “Veterans Day” quintuple if you want to gain some more.

Not only that – there’s a “First to the Top” contest to go along with release day – November 13th.     Well I suppose I’ll play along with that.     I’ll have to try and pick the most obscure piece of the tech tree.    Maybe I can manage a few bits of free premium time.     Several people are going to get a 10-year premium account, which is mind boggling.

World of Battleships/Warships is entering alpha, and has requested that anyone with 150 posts or more apply to be an alpha tester.    Feh.     Those who want to post over and over about a game before it’s launched are the most qualified to move it forward ?    I don’t think so, but who cares what I think.

Still, this is the title I’m most interested in, and it does seem to fit more with the “Not a twitch game” style that I prefer, so I continue to follow the development and hope for the best.

World of Battleships, World of Tanks

As reported by World Of Tank’s own Overlord, the USS Iowa will be getting a visitor center with game stations in it.    Guess what they’ll be running ?

WG.net is looking to do two key projects; one is a gaming center below deck, where people who come on to the museum and have an opportunity at the end of the tour to get to play some of the Wargaming products. The other one is a bridge experience, where we want to work with the museum to create a mock simulation of what it would be like if this ship was in battle and being attacked be warplanes.

This seems to be the part that Wargaming would want – a chance to reach new customers/gamers.    Now, the Iowa group, would want to make sure that the history is shown and taught, which is the second part :

In the ship’s below-deck digital theater, WG will offer a window into the past.  A virtual video experience from the bridge will recreate the ship’s role in supporting the American landings at Okinawa, Japan, in 1945. Visitors will see the ship’s impressive turrets as its 16-inch guns rotate and fire at their targets.

Hopefully, this will actually happen, and I’ll be able to give the virtual world a on-hands report, since I’m in the LA area.    Clearly will take a while to actually happen – if it does at all.

I’ve been hearing in the press about the move to bring the battleship to LA and love the idea; so little history gets preserved, it seems to me.    Ships certainly seem to get a lot of good treatment, like the Midway in San Diego.   That was a fun tour.

Motivated by the gaming connection, I discover opening is not really stated even vaguely.   Planned for July 2012 is the refurbishment; so Wargaming must be responding to this.    So plenty of time to wait until anything is seen, but I sure like the idea.