Over the weekend I let my War Worlds empire take a breather – all I did was answer the Sit Rep.      I left the Wibbit empire 100% crushed, and am moving on to bigger and better things – trying to expand out and touch two neighboring empires.

And needing a break from World of Tanks as well, I got back onto my Steam account.    Which they are very good at getting you to buy and install new games on – I mean, 50 cents ?     Sign me up, I’ll buy it !    Before I knew it I had installed three new games and messed around with some others.

My Flatout 2 experience continues as I try to finish the campaigns on Street Racer level.     This is a very accessible driving game and I got a bonus – I even had my boy playing it.    His current Ipad game of choice is some free racing game, which includes all the elements of typical video game grinds – unlocks, races, earning money for upgrades, and slickly rendered versions of real life cars which he gets to drive.    So Flatout was fun for him to mess with.

My Minecraft world Biomass got reopened and I found myself wandering the world again re familiarizing myself with what I’ve wrought.    What I would like to do continues to be connecting all my explored areas via railroad (minecart), which requires massive grinding to find enough iron.     I’d also like to find some of the new biomes in it – I have no dark wood, and no mesas discovered.      And I never have found a horse either.

With Minecraft I can also get slave labor – the kids will log in from the other PC in the house.     We have a total of two licenses, or I could start a three player game.   And they help me out doing various things such as mining for iron/diamonds, or working the farm.    Slop the hogs out on the North Forty son !

I installed Fallen Earth and started playing that as well – for whatever reason it’s a fun experience.    No death penalty (other than a debuff), and I’m a clone wandering a post-apocalyptic world doing quests and trying to get better at making stuff.    The game is apparently, at its heart, a crafting game.    That would be great, except I’ve only used a bare few of the items which I have crafted as I grind my way up skill levels.

Fallen Earth has pretty basic graphics and an “Old Everquest” look to it, along with nasty lag issues.      But creating a melee character and figuring out the game has been a very fun diversion.    One of the important questions as always, is money – will they be able to extract any from me ?    I’m not sure I can see why I’d bother, at the moment, and I don’t plan to start digging into all the web information about the game either.      I just need to figure out where the scenic overlook is on Clinton FARM…..

And of course, (most) all Steam games have achievements which I can’t stop myself from trying to achieve.     I am too goal oriented sometimes.

Once again I am playing World of Tanks.     The nicest side effect of that, is it gives me something to write about on the blog.

Look !   I just randomly played a game from my Steam List !       There’s just nothing to blog about if you casually pick games and play them a few minutes each until you get bored – or your family needs you.     Really, the format here is going to be much kinder on games that you play in-depth.

One thing I managed to do was “Complete” Flatout 1.    It’s quite a fun little racing game, with an awesome metal soundtrack.    It takes me back to the era of Destruction Derby for the PC with its ugly racing.   I heartily recommend putting it on your Steam wishlist and picking it up for cheap, on sale or not.     And I may go further with Flatout 2, but not at the moment.

No, for the moment I’m once again grinding tanks.     Two modes of play are happening – one is the familiar XP grind with an expected contingent : S-51, GW Panther, Tiger II, T32, Jagdtiger.      I’ve been playing these tanks forever; the arty were purchased about 2/10/13, and the others shortly afterwards.

I’m finding I enjoy playing the arty, post nerf.     Why ?     I think it’s less pressure.     There’s less of the random arty hate expressed during matches, there are fewer players, and fewer expectations from tankers during matches; with the notable exception of the guy on Fisherman’s Bay who thought I could cover both sides of the field and was not pleased with my decision to concentrate on the city.

I enjoy both equally, and am surprised to find I have an enviable win rate with the S-51 (57%) versus the GWP (47%).     And from here on out it’s all about progressing the GWP, which is close to the next unlock.

After all these months, finally getting close

Rounding out the XP grind list is also the MT-25, and the Somua S40.  With the derp cannon the Somua becomes an interesting beast.    Point the first : Derp cannon shreds the opposition if you can bring it to bear.    Point the second : This is a TD that cannot peek around corners at all.    Not in the head-in-then-turn sloppy style, but also in the gently curving looking-around-a-mountain style.   The enemy can see it, shoot it, and stay under cover, while not giving you any chance to fire.     Having made this discovery, it’s now a challenge to find useful hiding places and try to more shoot-and-scoot no matter what.

The XP grind is the first gaming – method? – I’m employing.   The second is taking my stable of newish light tanks and racing them up from the bottom of the standings list.    This is bringing XP to my MS-1 crew without the necessity of having an MS-1 match; and I am waiting for the day (after hundreds of matches, probably) when the additional crewmen I have complete their BIA perk so it will be effective on all of them. 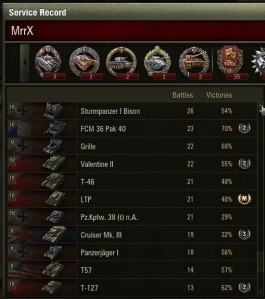 This includes playing the LTP, which is simply an asskicker and probably will get nerfed; the T127 playing as the medium in a gaggle of light tanks; and the Valentine playing the damage sponge and shot bouncer that can’t actually kill anything.    Add in the M3 Stuart (which is not much fun and I can’t do much with) and the Tetrarch (Lightly armored but heavily gunned – watch the ramming!) and I can fill an entire evening with Russian light tanks.

While I have little time to blog, I have managed to squeeze in an hour or so of gaming a night.     Hyperactive teenage mode is engaged; I find myself switching rapidly between one game and another.

Steam sales have me hooked.    I am finding myself checking nightly to see if there is anything else for me to pick up.     So far, I’m glad I did : turns out Flatout is quite a fun racing game.    Picked up a four pack of versions of it for $10, but really only playing the original at the moment.

Endless Space seems to have improved, or my temperament has changed, and I’m busily trying to win a game with a huge galaxy.    My first game I lost, because I’d more or less forgotten everything about the game.    Now, losing a game on newbie mode was pretty surprising for me, but if nothing else it was instructive about how to play – turtle mode is NOT going to work on this particular 4x.

Currently in first place and moving forward on to victory conditions – so the tooltips say.   I have no idea how to win most of the modes, but Domination sounds pretty good and matches my usual playstyle.

Torchlight 2 is also a lot of fun.    I got it, enjoyed playing one session, and promptly ceased playing it.    Now I’m advancing through level 19 on normal mode, and enjoying things quite a bit.    It’s pretty mindless, simple clicking, while looking for the good loot and enjoying the music – in that regard, the spiritual successor for Diablo, just as many people have said.     Berserker with Cestus is pretty fun.

It appears I need to update to 8.7 in World of Tanks, although without a 5x special I’m not too tempted to log in.     My non-virtual social calendar is full this weekend anyway, and next week will be work filled as well.   Summer is the busy season unfortunately.

Steam, though, will certainly be drawing me towards more games.