My son is such a diligent little budding Catholic.     Full disclosure : I am not Catholic.    But he was determined to give up the right thing for Lent, and so he set aside his Ipad, and played around with legos for a day or so.

Then he ended up mucking around with the PC instead.    Not exactly accomplishing zero electronics, but he is accomplishing broadening his electronic horizons.    I’d rather sit with him as plays Universe in a Sandbox anyway, smashing Shoemaker Levy into Jupiter, and making the Moon crash into the Sahara desert.

He’s also back to Minecraft on the PC.   Apparently tonight I am going to run an obstacle course with him which he spent a day or so building, with full redstone circuitry and probably lots of tricks I am not aware of.    I am proud to see him passing me up on knowledge of something, even if its as limited as the huge World of Minecraft.

My personal Minecraft time has been a bit limited, but I did go ahead and build a nether portal :

Comfortably ensconced in a cave I can wall off if needed.

And I was very fortunate to find a nether fortress right near my spawn point.

The view from the balcony

I set out to take it apart, brick by brick, because what says wealth like having a nether fortress in the overworld ?

After a few days of gathering bricks I have about one large chest filled with nether brick, found myself bored, and haven’t been back into Minecraft since.

Now, Minecraft is a sensation in the real world.    That kid of mine has a bunch of T-shirts, that foam pick, and the Lego set.    (It appears there is even more mechandise out there now, including a Nether Set and a Village)

With money like that getting into this IP, knockoffs and perhaps better games were inevitable, but nothing has bubbled up to my attention, except an Android game.

I managed to play Survivalcraft for Android, which looks like a worthy competitor and something with a piece Minecraft lacks – you don’t have to have aggressive monsters to attack, but you can have animals you better not disturb.    I quit playing it quickly because it’s too difficult playing such a game on a mobile.     And when it’s dark at night, I can’t see anything.    Gameplay, though, was fantastic and I would recommend it to anyone.

Survivalcraft on the Play Store

I wonder who will come up with a worthy competitor to the game, like others are asking.     Could it be Landmark ?    I’m not touching that one until it’s farther along in the development process.     Trove might be interesting; but I’m again going to wait until it’s more fully baked.    Despite many posts about it, I’ve never installed Wurm Online to check it out.

I guess I am waiting for the “next big sandbox” game to catch on before I even find out about it.     I got into Minecraft really early, didn’t like it, and came back a year later.     This time I’ll wait for the gaming world to hit me over the head.

I’m certainly having a ball with Universe in a Sandbox.

The game when you first load the solar system :

or, you can load up the Death Star orbiting the moon of Endor :

Or for extra silliness, a bunch of low mass objects.     See what I mean about “Having a ball” ? 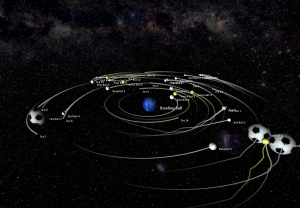 My boy, of course, loves when I abuse the simulation.     You abuse it by speeding up time a high enough factor – if it goes too fast, the math starts to break down, and planets get ejected from their orbits due to math errors.     This is great fun, as I tell him he’s doing things wrong, and then Whhhheheeeeee ! – Venus gets EJECTED !

After spending about a buck, I have managed to craft my first game badge on Steam – for UIAS.    And now it’s proudly (?) displayed on my Steam profile.    But you know what ?   The most important thing about this game for me is that my boy and I can talk about something space related.   Keeping that conversation alive is critical and worth it.

Not that my daughter cares, but you take what you can get.

I have spent the last two weeks on vacation in the spottiest internet country – Southern Utah and Northern Arizona.     These areas don’t believe in Wi Fi, and only believe in 3g/4g quite a small amount.      Motels and areas all promise Wi Fi but deliver something less than solid communications – and certainly not enough to download games onto.     A decent ping is to laugh about.   But tonight, finally, I am home after being burnt while climbing various canyons and keeping the junior rangers happy.

I did barely manage to participate in the Steam Sale.     I watched and bought a fair number of games really cheap.     Fallout : New Vegas for $2.50 had to have been the cheapest.    I bought a fair number of games and am tempted to buy more.    Steam really is the DRM system made for gamers, including such low prices why wouldn’t you buy things ?

With no connectivity, that left Minecrafting over the weeks.     If seeing Zion Canyon doesn’t make you want to dig deep tunnels and find gold, you must not play Minecraft.     I’ve managed to dig another mineshaft and continued stockpiling iron.   It seems I’m not going to stop at the Mooshroom Railroad, instead I’ll be connecting all my far-flung domains with minecart rails, because it’s fun and it gives me something to do in game.

I am thinking about using some of that useless dirt I’m stockpiling as well, and seeing what would happen if I built a dirt ziggarut.    Or pyramid – name it as you please.    The idea is a simple mountain, starting at a particular corner, and it can just get as big as it needs to.

But in the meantime, Steam games beckon.     Universe in a Sandbox is surprisingly fun to mess around with.     My boy and I sat down in front of the computer and started to play around with the solar system.      For a start, we just watched the simulation run; Mercury swings swiftly around the sun, and you get a sense of just how big even the solar system itself it, trying to find Pluto and Jupiter in there along with the Earth.

Then we sped the simulation up a bit.     Or a lot.     The simulation breaks down at high rates of speed, and planets start getting ejected from the solar system, which is great fun.      And next, we wanted to see what would happen if we made Mercury weigh as much as the Sun.     This turned the Earth solar system into a binary-like star system as Sun and Mercury whipped around each other, while Venus was flung off into the void, and the Earth got way too hot and everything burned to a crisp on top of it.

Next time this title is on sale – get it.     It’s a bunch of laughs, and if nothing else, got me and both of my children talking about space.     I’m betting they even learned a thing or two.      And this morning, instead of waking up and playing Minecraft, the boy was trying to log into Steam.    He wanted to hit the earth with some asteroids before breakfast.