Your career in Fortnite is also an interesting topic.    Compare this with your PvP game of choice.

I started out as a clueless newbie who had seen nothing more than my daughter running through a virtual world much as I have done many times over the years, and/or watching her fall from the sky in a fantastic skydive / glide combination before hitting the ground and starting the real match.

You control your direction and the speed of falling. You eventually deploy a glider which falls slowly but has lots of lateral movement.

And I played my first game.   I got killed, I think.   I followed my daughter and obediently listened as she explained nuances of the game.    I stepped back and let her turn on the feature “If you’re handicapped and can’t hear well, we will show you where the sound of footsteps is on the screen” – right up my alley considering the amount of silent gaming that I do.    (If you play on a PC, turn this on.   Super helpful.)    And her friends were all amused at the Silent Dad fumbling his way through the game and helped protect me.

But after a dozen games I was on my own and solo, and I’d figured out the first pieces of the game.   How the weapons work, how to build a wall, where the controls were.   And a funny thing happened – I won the game.

No, I definitely suck at this game.    It turns out that Epic has added bot players to the game, and then there are the people trying to play on devices which Fortnite was never meant to be played on, like smartphones, or where control issues are present.    And I merrily pickaxed them, shoved shotguns in their faces, and avoided anyone who looked like they were building structures, until I was the last man standing.

People build crazy things like this contraption at the speed of mouse clicks. I’m much slower.

And I really enjoyed it.   I had come out on top, after all.     And in my mind it was all those years of shooters via the PC (Wolfenstein, Doom, and the rest) that made me victorious.   So I played another solo game.

The COVID 19 lockdown convinced me to keep going and stop being such a cheapskate, buy the $10 pass, so I did.   And I kept winning.    Almost every game.

I’m not sure when, but at some point I only managed to keep in the top 10 or top 5 where I have stayed ever since, but that has to be the gentlest introduction to PvP I have ever been exposed to.    And in a 100 person murder simulator no less.

No sense of loss at all.   Earn XP by doing well at the game, and carefully managed by the designers, so you don’t earn too much or too little and follow their intended path to Max Level.    Move up and down skill tiers based upon how well you do in the game (The formula has not been shared with The Internet).

I can compare this well with Ingress.

I think I’m hooked now, for the moment anyway.    And a lot of it comes back to that intoxicating feeling of beating 100 other people at The Hunger Games – whatever the truth of that is – and gives me a window in the success of Epic.

An advantage to having adult kids in the house is the games they discover might be fun.    Such is the case with the everpresent Fortnite.

I have heard about this game for a year and a half from all the muggles of the world.    “Oh my god, my kid is playing Fortnite too much !”    Being busy with Ingress at launch time and other priorities since, I have never investigated further and simply sneered at the idea that the game might be interesting.    This is just for kids !

Then my daughter got an Xbox.    And she LOVES Fortnite.    She’s been playing for about six months and is pretty good, and has some unusual priorities as far as I’m concerned – her favorite thing is the skins and wraps and whatnot that the game has.  She immediately told me I should play it, but also threw out mixed signals since she didn’t want me partying up with her crew (a bunch of real life friends), especially after they all started telling her how cool I am.   I didn’t want to screw things up for her.  But she convinced me to try it out, and I journeyed and persevered through figuring out

And so here’s what I figured out, credit to Wikipedia for most of it :

Back in 2017 Player Unknown’s Battlegrounds – PUBG for the initiated – came out and was a huge success.    I was tempted to buy into it, but PvP has never been my thing and it cost around $40 I believe.    Having a huge Steam backlog keeps me from buying things nowadays.

Also in 2017 Epic was putting together a free to play game called Fortnite.    This game sounds like a bunch of gamers getting together in a conference room and talking about what their new game should have :

And they went ahead and realized their game.   It was OK.   RockPaperShotgun was not very complimentary, making it sound like microtransaction hell.

But when PUBG came out, they realized their game was pretty close and a good fit in the Battle Royale era, so they threw their hats in the ring.    In a super short two month timeframe they created “Fortnite Battle Royale”, which now has become Fortnite.    With the success, the titles have switched.

Fortnite BR is now a multi billion dollar success.    They have the entire teen universe playing this plus God knows how many other gamers.  After you get past Battle Royale the game has features including :

My team. They’re just skins, absolutely no in game benefit.

I would love a bunch of X-Men outfits but shelling out $30 isn’t going to happen.

Have I mentioned the main game yet ?   Why, no I haven’t.  It will be familiar to anyone who knows the Hunger Games universe.   You skydive onto an Island along with 100 other players and fight.    Find weapons tucked away in different spots on the map, acquire resources and build up little structures and rooms.  A “Storm” continuously closes in and keeps the players from just hiding out far away from each other.    Eventually a couple of players are squooshed into a small area and the last person standing wins.

The “Lobby” is where everyone shows off their cool skins and emotes, just before the match starts.

You can play solo (my preferred version), or Duo with two people, or Squad with four (My Daughter’s favorite).   Voice coms, which I have avoided with all the determination of an old bastard hating on new technology, are well implemented and inescapable.   And there is NO COMMAND LINE TEXT CHAT.    You can only talk with your teammates….. with your headset on.   By voice.

It’s fun.   It’s super hard to win.   But it’s all the game aspects behind the Battle Royale that make it a big success.

Then there’s the tweaky things I noticed.   XP is an interesting one. 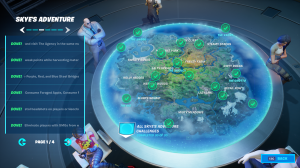 Yes, I have completed all the missions for the XP.

And there are no rewards for winning the game.    No rewards for first place, second place, whatever.    Very little career tracking other than this.

3 Wins to my name

I remember each of these wins clearly.    It’s a fun sense of accomplishment.

So for now I am a daily player contributing to the juggernaut that every muggle parent exclaims against.

Fishing. For XP and Health with bonus Legendary weapons occasionally.