1985 was a good year.    I was 20, and I worked in an arcade at night.      Probably my fondest memories are of playing the newly-released Space Ace.    I’ve waited quite a while for a good PC version of the game to pop up, and one’s now available on Steam.

It works well as a PC game.    There’s a Cadet, Captain, and Ace level for you beat.   Being a person who beat the game at one point, it didn’t take me too long to hit the final battle on cadet level, and I then just played continuously until I had all the moves down once again and beat it.    The game itself probably takes about 10 minutes for a full playthrough and is worth the full priced amount ($10).    You can save a buck as I write this .

The only thing surprising about it is….. the graphics aren’t really that good.    The Laserdisc based cabinet versions I remember had fantastic and rich cartoon graphics.     The PC’s seem a bit chunky.     Perhaps its hard to transfer that to the way graphics are created today.    I could only get it running in 1152×864. 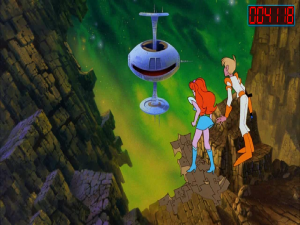 As a game itself – it always stands out as unique in my mind.    You had to hit that joystick at a precise point in time.     Apparently, today this is known as a QTE – Quick Time Event game, and these Laserdisc games birthed this term.

She may be kidnapped by aliens, but she has access to a communicator.

During the final battle, it was a time of insanely intense concentration.     Usually, I had a helper with me at the arcade, to keep anyone from doing things to distract me.    And you had to be DEAD ON with your moves, every time, or it was time to be dead.   And hopefully you still had another life to keep moving on with (usually 3 IIRC) if you did. 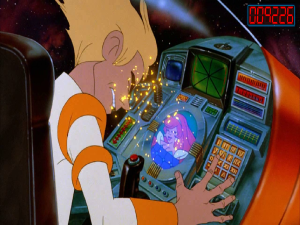 GET ME OUT OF HEEERRRREEE ! – this is half of Kimmy’s vocabulary.

More than one guy watched me and remarked “That looks like work”.    And, to a certain degree, it was, but the ability to concentrate so hard on something and succeed was a intense feeling for me.   And then life went on, I’ve never played another QTE game, and I’ve wondered *for freaking ever* if the game would surface on the PC.

Beware your dark side

On cadet mode for PC, it was more about making the move at the correct point, and not making the wrong one.     I’ll try the harder versions next, but one thing at a time.

The nostalgia factor is strong for me.     So I thought, let’s try this out on my boy, who is Mr. High-reflexes as he plays Mr. Crabs on his I-Touch.      I got him familiar with the gameplay before he went to bed – a couple games only – and I could see that light in his eyes that says “This is fun”.    So I’m still thinking it holds up well even for those who’ve never seen this before.

If only there was a native screenshot functionality.   I installed Snagit to get these shots, but it will expire in 30 days.

The motorcycle scene. Shades of the Tron Lightcycle.

The only thing really bothering me is the Steam store description of the game.

No, Mr Categorizer, this is NOT a casual game.    This is a heart-stopping, adrenaline fueled rush to both memorize a large sequence of moves (which can be reversed left/right randomly on you) and a challenge to execute them in the split second timing required.     This game is concentration personified.

Well, especially at one or two quarters per 5-15 minute game.