Scouts built, colonizers begin moving and getting built, and the crowded universe keeps moving along quietly.

My concern has been the AI’s will see my small fleet size and decide to pounce on me.   It hasn’t happened, so I scrap the super useless Fighter design to build more, and modern, ships.

Fighter III designed.   This one upgrades to fusion engines, sports a shield and Zortrium armor, and a computer upgraded to Mark II.   I start building a few in a couple areas.

I also have built up a lot of BC in the Treasury.   I blow all but 5,000 BC on frontier planetary development.

Peaceful development continues.   We discover soil enrichment and set all colonies 50% to use it.   The eastern frontier is getting settled and pushed out finally. 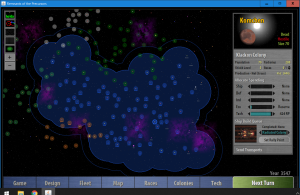 And I just notice – my largeness penalty is gone, for diplomacy.   No wonder none of the AI’s has declared war on me.

There’s nobody in the corner. 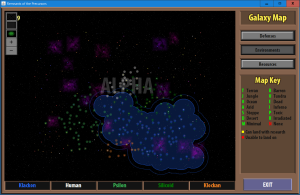 So the question is how much farther I can go north on the eastward map edge.

The Silicoids have done this twice.   They send scouts to one of my baby colonies with 2 pop and 10 factories or so; they bomb it once; then fly off.   This is the extent of the AI initiating combat on me.

I mean, it works as far as playing the game.   I will continue to build up my planets and expand, and once I get boxed in and developed I’ll initiate my own war.   But this is anything but what I was expecting.

Oh wow.   The vote is happening “soon”.    I believe this means on a “25 turn”.    Thankfully I am at good relations with all my neighbors and population wise, I am first !

This year equals turn 189, so probably the vote comes in 11 years.

(Frantic save – next turn a whole bunch – practice vote)

Seems I was wrong.   The vote occurs in five years, Year 3567.   With this bit of cheating, I also find out my opponent is the Psilons.   I’ve managed to stay on the good side of the other races that I’m in contact with.

So time to attempt to win the game.   What’s my strategy ?    Give away the farm to Silicoids, Klockans, Humans and any other races that appear.   They want a tech, they can have it.    And hope that others like me enough to vote for me.

I trade the Humans a very high computer tech for the fusion rifle….. and their alliance with the Psilons is broken !

I also meet the Aviari along the corridor I am trying to expand into.

That is not recoverable from.

The first contact penalty will disappear with time.   The Expansion penalty, probably not.   I don’t understand why the other races do not show that one.   In any event, it won’t matter for the vote and so I have probably met the race I am going to be warring with.

My tiny little fleet (Literally – my warships are the small “Fighter III” class) is on its way to their space.

The Klocks refuse my offer of alliance.    That’s a shame.

It’s war with the Aviari.

Aviari in Red. I have nothing but scouts in the area.

Well let’s see how well they can roll me up, unless I win the vote.

Apparently 160 votes required for the win.

Well that harmony is unlikely to last long.    All the newly introduced races have very low relations meters.   None of them accept my request to trade, but amusingly, I renegotiate my trade agreement with the Psilons.

In the expected 3592 vote I will have much less support.

Class XV planetary shields show up on the tech list.   I set everything besides force fields to the minimum, this will be a key tech to hold onto my planets if it comes to that.

So far, not much of an Aviari invasion, but I’m trying to move up towards them.

I discover the XV shields, and trade with my best friends the Klockans and get Advanced Soil Enrichment – to further boost my population numbers.

Some races have lost the penalty for “The Klackons are too large” and are on the low to middle range of the relations meter.   I can hope, I suppose, for victory.

600 Fighters on the way to Techoh

I am unimpressed by the Aviari war machine.   He sends 8 small ships against my 25 fighters with 8 scouts, and does no damage while losing 5 of his ships.   My first battle is victorious.

A fight over Ise, the Aviari world, results in a victory for our forces.   Traded 50 or so fighters for 100+ of theirs along with 8 large ships.    I retreat back to our planets since I have no troops in the area and our bombing was ineffective.

Hey – there’s a bug in there somewhere.

The vote ends inconclusively, 183 – 121.    The final math is right, but I saved over the vote file too quickly.    I think the Mrrshans voted for the Psilons instead of Klackons.

Can the Klackons pull off the impossible, and get voted to victory ?    That will have to wait 25 years and also for the next installment of this AAR.