So far, this game has gone through two phases and is firmly into a third. 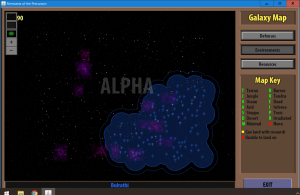 Still no other empires found.

And now we have the Meklar to deal with.

The good news is we are much bigger than they are.

The Meklars are way ahead of us on tech.   I set research priorities to balanced (to get weapons and shields moving) and start spy espionage.

Hopefully we’ll be able to start grabbing these via espionage.

Their warships are moving in on two of the planets I have colony ships heading to.   I don’t think I’m going to just get all of them.   Especially since I have no warships of my own.

Good, these ships they are sending my way appear to be warships and not colonizers.   I can hopefully grab more colonies before conflict begins. 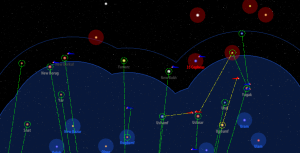 Ushnar should be colonized first.

Oh this is useful !

Spending set to 50% for factories due to this

After stealing a ton of technology from them the Meklars have enough and declare war.   With the newly stolen Hard Beam I make a few ships under construction, but this will undoubtedly go badly for us until I can build up further.

Oh my.   Now I see why the Meklars had not expanded so well, the Alkari are beating them up. 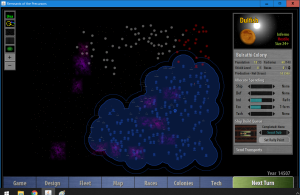 My Western side is a bit exhausted with colonizing but we keep it up.

I knew this was coming

One of three colonies the Meklar are hanging around and bombing with single ships.   In the meantime, my backlog of colony ships continue to arrive in the neighborhood and create more new ones, while warships are still 7-8 light years away. 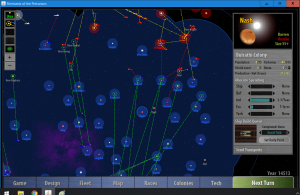 The Spying campaign is going so well against both the Alkari and Meklar that I decide to tick up computer research spending and reduce all other categories one tick.

So far, the power levels are probably good.   With some time my planets should build up enough to create a deadly war machine. 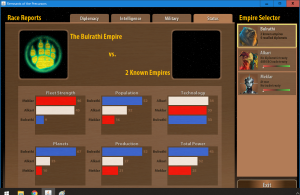 Too much spying has pissed off the Alkari who declare war on me.   I’m not too close to them so hopefully it’s one of the phony wars the AI creates every so often. 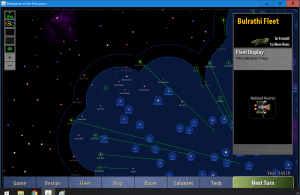 The Westward frontier is suffering from success.   The planets building colony ships continue to be far away and waiting for the right colonies to build up enough to take their turns building ships.

The first of my warships have arrived at the frontier near the Meklar, at Ushamf and Ulam.

Battle at Ushamf is an immediate retreat; one medium versus one large is not a good idea with nearly equal technology.    But it doesn’t matter.

I will now enter the phase of controlling the space in and around both my colonies, and the Meklar (and Alkari?).

The Alkari seem to catch a lot of my spies.   I ratchet down spying and hide for the Alkari, ratchet up spy defense, and ratchet up spying on the Meklar.   Let’s see how the AI behaves if you do that for a bit then turn it back on.

That’s more like it !    6 warships in orbit at Ushnar, and the Meklar have retreated rather than fight.    More colonies are coming online and building, and a steady trickle of my medium sized ships move towards the frontier.

The Meklar are trying another tactic – scouting non-bordering colonies and probably bombing their rich factories away.   Including one of my rally points. 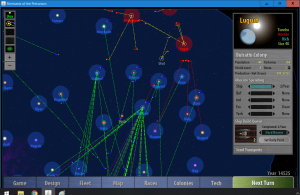 Colony Yagak is an ultra rich world they bombed away and recolonized.

I don’t yet have enough ships to defend the area, and judge that it’s probably best to wait and let additional ships arrive, then send them to these colonies to chase off the attackers.

Meanwhile, despite their ships showing up on the west, I’ve still not “met” the Human empire.