A while back I saw a local billboard for a game “Summoner’s War”.   This told me the game has to be profitable, insanely so, meaning their players are going to get hit up for a lot of money.   I declined to install it. 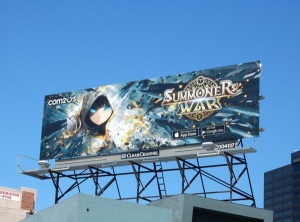 But then TTR tells me to install it to earn several thousand gems.   All I had to do was “Clear the Faimon”.    I didn’t really know what that meant, but never mind, this is what you do nowadays.   So I loaded up the game and started messing with it.

This is what Idle Heroes was obviously based on, and while they made a good game, this one seems to make a lot more sense.   You are a summoner, and you dig up various creatures to fight on your behalf.   Standard stuff, so far.

It gets more complicated though.   Each monster is part of a – family ?    Your Hellhound comes in Water, Fire, Air, Light, and Dark varieties.    Each will have different abilities.   And the Summoner’s War community has opinions about all of these, which ones you should get, which to get rid of, and which are syngergistic with other ones.

Each monster has a level, of course.   Then there’s the “Awakening” – you guessed it, to make your monster more powerful – along with “Runes”, which are pretty much equivalent to gear for your monster.    Once your monster gets Awakened, it also gets a name, instead of “Wind Pixie” you call it “Shannon”.

Eventually, I cleared the “Faimon”,  (I thought) by clearing the easy mode of a scenario area called Faimon Volcano.    I still haven’t gotten my reward – and the ad is not available to me anymore – so maybe I need to clear the Medium or Hard mode.   But I’ve also switched to this game because it’s fun, highly grindy, terribly complicated, and yet ridiculously easy as well.

So.   Where am I in game ?   I have acquired a raft of awakened monsters, which are the more important ones.     Kaimann, Shannon, Bernard – the better ones – plus Tigresse, Lamor, and Cahule.   I want to awaken Lapis, Khmun, Eleucia, Namib and Teon.   Based on advice from other players, I am trying to get my Lapis to be Awakened and five starred (and my first monster that I awaken, too.   The others are achievement awards and rare random drops).    I have 3 five stars, 4 four stars, and a gaggle of lower starred monsters.

Lapis is a free monster – everyone who plays gets one – and is four starred and considered super useful, especially for the newbies.   As I’ve tried to understand the game I’ve realized the truth of this.    But she requires a lot of materials to Awaken, so I’m grinding away to move her up.

I also need runes, which makes sense as they are “equipment”, and would like to move more useful monsters up to 5 stars and max level.    I can clear the 3rd level of the various dungeons – there are 10, I believe – and want to consistently and easily clear the 4th next.

Some of my newbie, low level runes. These are my best though.

I also need a monster called Veromos, which requires a long procedure to acquire – by fusion.   I have the first monster I need (Water Bearman) and am looking out for the next creatures to appear.   So far, this is a lot of fun to play.

Now you may be wondering how much I’ve spent.   Nothing.   I know better nowadays about spending money in today’s games.   Anything I buy seems to want me to spend $30 (!) and I can’t get excited about 5 summonings with a 1-5% chance to get “a good monster” for that kind of price.   Thankfully, the premium currency can also be acquired “free” in limited quantities so if you’re patient enough you can buy some stuff.    I suppose we’ll see.   It’s also possible I haven’t found anything worth buying because I’m not fully understanding the game yet.