World of Tanks, World of Warplanes

World of Tanks loves the holiday season.   Code for the New Year’s bonus is 2015WGNY.    This will get you one free day of premium.

Patch up, and log into World of Warplanes, and you’ll get another day of free premium.   I didn’t even need to fly a battle!

In the meantime, I continue to grind the matches.     Bought and elited the T-60, a Tier II Russian tank.

The T-60, nicely skinned even.

This has a machine gun to even rival the T7 combat car.     Had to stop to fire it, but when I managed to do that, it chewed up every enemy I could keep the shells flying into.    5 matches elited it, and I moved on to the T-70, which I managed to buy just before the special ran out.    Hey, saving 20k credits is always a good thing.    I own two additional soviet TD’s, but now am mostly concentrating on credits and matches.

Now I own a tablet – a Nexus 7 handed down to me after my wife got her Ipad for Christmas.      I’ve not really found much of a use for it, but it’s nice to have apps to view when playing Tanks.

I get stats, stats, and more stats with this one.    It’s also nice enough to give me an updated WN8 rating after every battle, along with Wargaming’s rating.     I have to admit I’m fonder of Wargamings, since WN8 is biased against lower tier players.   But getting my WN8 rating for each tank is very instructive. 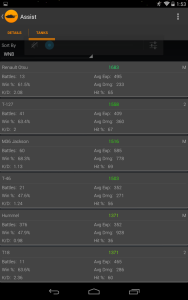 My top tank for WN8 with a meaningful number of battles (100) is…….. the Hummel.    I’m not too surprised.    This is from many matches before the arty nerf, after all.   But it’s also interesting to see which tanks I “did well” with according to that formula as well – and the well known seal clubbers T-127 and T18 are of course on the list.     The Jackson is a bit of a surprise, but I always felt I did well in that beast. 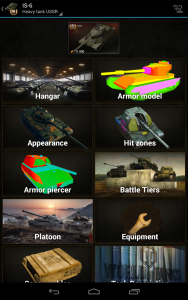 Then there’s this app.

I grabbed this app (WoT Knowledge base) as a helper to see where to penetrate specific tanks.    (Shoot the IS-6 in the TURRET from the side!)    It has a wealth of information about all of the tanks in the game for you to page through as well.    I haven’t explored this carefully other than the armor penetration models. You can get this app here.