I started improving my roadway system but it’s not much at the moment. 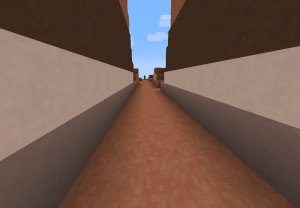 I have a three-wide cut and path through the small part of the Mesa leading southward.

But the Nether Portal is complete.

I got some inspiration wandering through branch mines, and looking at how striking the white diorite veins were.   So I decided to make a Diorite Portal.

Step 2. Even out the area and square it off with polished diorite.

Step 3, was to make the entrance and walk in be impressive.

I filled in this area and the outside entrance to the mine(s). And I put a little door into the one cavern. 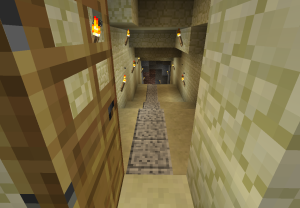 Add a diorite pathway to the portal. Filled in the cavern with sandstone for the effect of descending into the desert depths. 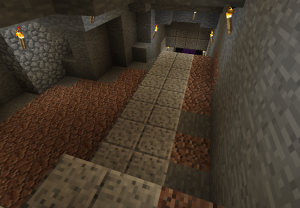 Pathway increased to double wide near the end

And the Chamber Of The Portal

The portal leads to a medium sized cavern in the Nether, populated by a bunch of zombie pigmen and one ghast.    After several tries, I managed to bat one of his fireballs back to him and kill him, after he set a lot of fires and blasted a lot of netherack.     Thankfully, I didn’t hurt any zombie pigmen.

After building a cobblestone barrier around the portal, putting in a chest and a crafting table, I started making a pathway through the nether. 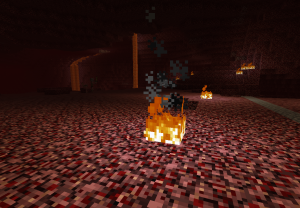 What I saw when first stepping out of the portal.

Now, to explore and find a nether fortress.